Congenital Naso Lacrimal Duct Obstruction (CNLDO) is the most common cause of watering and discharge in children. Blind probing is the reliable technique done for both diagnostic and therapeutic purpose. Recently, there has been a shift seen in the management of CNLDO from blind probing to endoscopic guided probing and irrigation where diagnosis is made and therapeutic measures are done at the same time which avoids unnecessary exposure to general anaesthesia and also increase chances of success.

Congenital Nasolacrimal Duct Obstruction (CNLDO) is one of the most common cause of watering and discharge in children.1 Anomalies of lacrimal drainage system which present since birth are mainly confined to lower end of Nasolacrimal Duct (NLD) that is at the level of valve of Hasner.3 An imperforate membrane covers the valve in 20 % of the newborns and these children present early with complaints of watering and discharge.2 Following the natural course of the disease 70% of the children undergo spontaneous resolution within 3 months and rest 95% by 1 year of age.4 The remaining 1-6% of the symptomatic children need some kind of intervention.4,5 Probing is a reliable technique to overcome the obstruction at the level of valve of Hasner. As per published literature results of simple probing (Blind Probing) vary from 55%-95%.6-8

This technique was initially described by Petrus camper in 18th century and is still followed without much modifications.9 In this technique blindly, the anatomical obstruction in the lacrimal drainage system which most commonly is in the form of an imperforate membrane is overcome with the probe.9 During last two decades with the advent of rigid and flexible nasal endoscopes, it has now become possible to visualize the valve of Hasner in the inferior meatus. Encouraging results of endoscopic probing and irrigation has led us to believe that this procedure should be carried out essentially under endoscopic guidance only. It could still be an issue of debate that whether all cases of CNLDO should be managed with simple probing or should undergo endoscopic guided probing. There are a few limitations for an oculoplastic surgeon in terms of expertise in the technique and availability of the instruments. In this article authors would like to discuss the advantages and disadvantages of both the procedures.

The Nasolacrimal Duct (NLD) is a single passage that connects lacrimal sac superiorly with nasal cavity inferiorly through a small opening in the inferior meatus.1 It is a bony opening which starts from the lower part of lacrimal sac, courses along the lateral wall of nose posteriorly and inferiorly, and opens in the inferior meatus.1 This opening is covered by an imperforated membrane which ruptures spontaneously after birth. This procedure can take up to months in few newborns and in 95% of the children it is achieved by 1 year of age.5 In cases of CNLDO, Nasolacrimal Duct can have various anatomical abnormalities and the pathology may lie beyond an imperforate membrane covering valve of Hasner. However on endoscopic view of inferior meatus, following observations are made:

In this technique an appropriate sized Bowman’s probe is inserted into the canaliculus and is advanced till bony hard stop is reached. After hitting the hard stop, probe is slightly withdrawn and is tilted vertically down into the lumen of NLD. Once the probe reaches the lower end of NLD, the membrane is perforated which can be felt by the surgeon while advancing the probe into the nasal cavity. This procedure is a blind procedure and carries chances of creating a false passage.

Endoscopic guided procedure allows us to directly visualize the inferior meatus and helps us in better understanding the pathology of NLD obstruction. This also helps to avoid creating the false passage and allows us to simultaneously rectify the anatomical variants present in nasal cavity. The procedure is carried out under general anaesthesia. A nasal pack soaked in 0.025% xylometazoline and 1:30000 adrenaline is placed in the inferior meatus that is between inferior turbinate and lateral wall for 5 minutes. This helps in achieving hemostasis of the nasal mucosa which keeps the field clearer and hence improves visualization. After removing the pack the nasal cavity is examined to rule out any preexisting nasal pathology. A 2.7mm rigid endoscope is used to visualize the inferior meatus. The first step in endoscopic guided probing and irrigation is to check the patency of the lacrimal drainage system. The upper canaliculus is irrigated with flourescein stained saline using a 25 G lacrimal cannula, NLD is simultaneously visualized with the help of 2.7mm rigid endoscope inserted into the inferior meatus. In cases where irrigation fails probing is done through the upper punctum into the sac and progressed into NLD in a step wise manner under endoscopic monitoring and the movement of the probe is visualized in the inferior meatus. Following observations are made: 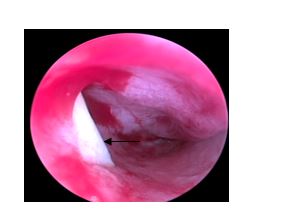 Figure 3:(A) buried probe travelling submucosally along lateral wall of nasal cavity till the floor in inferior meatus.

As per published literature, there are studies comparing the result of simple probing with endoscopic assisted probing and irrigation and the results of these studies are encouraging enough to switch over from simple probing to endoscopic guided probing where direct visualization can improve outcome.18-21 It also helps us in identifying the track of probe, site of obstruction and mucosal exit which decreases chances of creating false passage (Table 1).18-21

Direct visualization also helps in understanding the variants and causes of CNLDO and provides optimal management options as discussed above. Kushner et al reported the outcome of simple probing in children above 1 year of age and concluded that one can divide the obstruction seen in CNLDO cases as simple ( membranous) and complex (non membranous).15Similarly Honavar et al, Kashkouli et al and Maheshwari et al also described that complex obstruction in the form of either firm (thick membrane) or hard stop (Buried probe or false passage) which is non membranous in nature as the major cause of failed probing.6,8,13 But in all these studies they were not able to describe the exact nature of obstruction as it was done as a blind procedure. Wallace et al has recommended use of endoscope in probing and syringing as he reported 100% success rate in cases where CNLDO was associated with membranous block over opening of NLD.16 MacEwen et al reported 92% success rate in older children with initial probing where pathology was restricted to lower end of lacrimal system and also concluded that this procedure helps in better understanding of the outflow system.17 Cakmak et al compared the results of both the procedures and reported to achieve 94.4 % successful results with endosopic assisted probing as compared to 86.4% in cases of blind probing.18 Similar results were obtained by Fernandez et al who reported 97.7% success rates as compared to 50% in cases of simple probing (Table 1).19 In view of these studies the reported success rate with endoscopic guided probing and irrigation remains consistent ranging from 85% to 95%.1 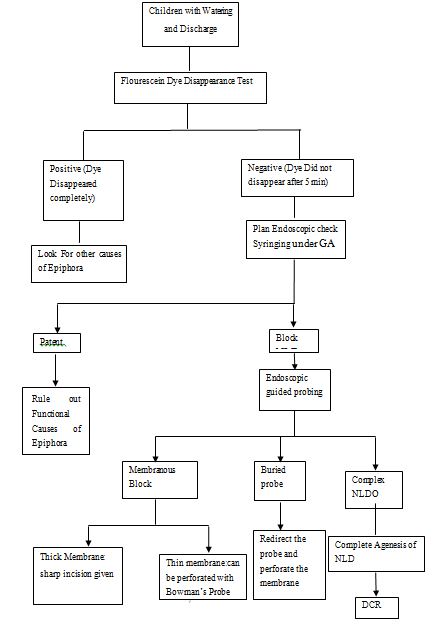 There has been a changing trend seen in management of congenital nasolacrimal duct obstruction. There are studies in the literature which show a better outcome in the management of these patients when combined with nasal endoscopy and successful results are seen in upto 95%. 1There are a few limitations of the procedure like as it needs more instruments therefore it increases the cost of the procedure but there are less costly endoscopes available which can be used in simple procedure like probing and irrigation. The other limitation remains the learning curve for an oculoplastic surgeon as to handle nasal endoscope with understanding of nasal anatomy is challenging but to deal with the system where 60% of the lacrimal system courses through nose, a dacryologist cannot escape without having a thorough knowledge of nose.1Subsequently, encouraging results of the procedure has made us believe that one should shift from simple probing to endoscopic assisted probing and irrigation as it not only yields improved outcome but also minimizes the chance of creating false passage and thus obviates the need for multiple general anaesthesia in a child. Authors recommend that all cases should preferably undergo only one probing possibly under guidance of endoscope.