Type 2 diabetes mellitus (T2DM), one of the main threats to ageing population health in the 21st century, is described as a worldwide epidemic as it affects the health and economy of almost all countries regardless of socioeconomic status or geographic location [1]. It is based on high blood glucose, insulin resistance and relative insulin deficiency. T2DM leads to an increase in the risk of future cardiovascular disease [2-4] and is the primary reason of mortality and morbidity in most high-income and developing countries [3-5]. Lifestyle factors, sleep duration, physical activity, regular exercise and healthy-balanced diet are essential components in prevention of pre-diabetes [4-5].

Hearing loss and its complications reveal commonly in type 2 diabetes mellitus (T2DM) [6-8]. A number of studies have attempted to identify the source of hearing loss in those with DM [9-14]. Several studies investigated that T2DM leads to side effects of hyperglycemia which may be retinopathy, neuropathy, nephropathy, vascular diseases. The several studies reported that hearing impairments can affect even the simplest tasks of daily life [4,9,17]. The relation between hearing loss and T2DM among middle aged population and patients are documented and reported in detailed [11-17]. The aim of this study was to investigate the relation between neuropathy and hearing loss among type 2 diabetes mellitus (T2DM) patients.

Cross sectional study carried on subjects aged between 20 and 60 years who visited the Ear Nose Throat (ENT), diabetic metabolic syndrome, and Endocrinology outpatient clinics registry of the Medipol International School of Medicine, Medipol Hospital during the study period from February 2015 to May 2017. IRB ethical approval for this study was obtained from the Medipol International School of Medicine, Istanbul Medipol University, and informed written consent was obtained from patients before the start of the study.
The current sample size was determined by considering prevalence rate of 10%-12% impaired hearing loss among diabetes patients in Istanbul [1,7] assuming 99% confidence interval and 2% bound on the error of estimation. The minimum sample size detected as 850 subjects. Finally, of the 850 registered with diagnosed diabetes and showed indications, only 610 (71.7%). agreed to participate this study at the Medipol International School of Medicine, Istanbul Medipol University.

The patients were considered to have DM if they have a history of DM and are currently taking oral medications for diabetes. The World Health Organization (WHO) [2] and International Diabetes Federation (IDF) [3] Bener et al. [4-5] defined DM when fasting venous blood glucose concentration is equal or higher than 7.0 mmol/L and/or for a 2 hour post-glucose tolerance test (GTT) venous blood glucose concentration is higher than 11.1 mmol/L. A glucose meter used to measure fasting blood glucose of all patients. Oral glucose tolerance test (OGTT) was carried out only if blood sugar was less than 7 mmol/l. The inclusion criteria comprised of diagnosis of T2DM in conformity with international standards by WHO and IDF [2-3], fasting plasma glucose (FPG) higher than 7.0 mmol/L and/or 2 hours postprandial plasma glucose (PPG) or random plasma glucose higher than 11.1 mmol/L (5). Furthermore, having regular anti-diabetic drug treatment for at least 3 year, aged between 20 and 60 years, residence in a city of Istanbul for more than 3 years-period.

Motor nerve conduction, F response, and sensory nerve conduction studies are important methods of documentation and follow up of nerve functions in Diabetic neuropathy (DN) [17]. Motor nerve conduction studies are affected in a small subset of DN (large fibre neuropathies). Even in large diameter fibre neuropathy nerve conduction velocity (NCV) is insensitive for many pathological changes known to be associated with DN. The nerve conduction changes are non specific and key to the diagnosis lies in excluding other causes or those superimposed on DN. Entrapment neuropathies are common in diabetic patients and result in unilateral NCV changes, especially across the entrapped segment of the nerve. The commonest abnormality in diabetes is reduction in the amplitude of motor or sensory action potentials because of axonopathy. Pronounced slowing of NCV suggests demyelinating neuropathy, which is rarely associated with diabetes; therefore pronounced slowing of NCV in a diabetic patients should prompt investigations for an alternative diagnosis. However, the likelihood of chronic inflammatory demyelinating neuropathy (CIDP) occurring in diabetic patients is 11 times higher than the normal population [17]. The NCV is gradually diminished in DN, with estimates of a loss of about 0.5 m/s/y [18].

The statistical analysis was performed by using the Statistical Package for Social Sciences [SPSS]. Student’s t test was used to ascertain the significance of differences between mean values of two continuous variables and non-parametric Mann-Whitney tests were used to determine if the results differed, indicating lack of normal distribution of the variable. Chi-square test Fisher’s exact test (two-tailed) were performed to test for differences in proportions of categorical variables between two or more groups.
A multivariate logistic regression model was performed to evaluate the relation between selected lifestyle factors, neuropathy, and presence of hearing loss. Confounders were assessed statistically through change in beta coefficient (crude β-adjusted β), and if the change was more than 10%, the variable was considered as a confounder and retained in the final model. Model fit was assessed through the Hosmer-Lemeshow goodness of fit test. An insignificant p value for Hosmer-Lemshow indicated that model was good fit. The cut-off value for significance was chosen as 0.05.

Table 1: Comparison of socio-demographic and clinical characteristics between diabetic neuropathy patients with and without hearing loss (N=610) 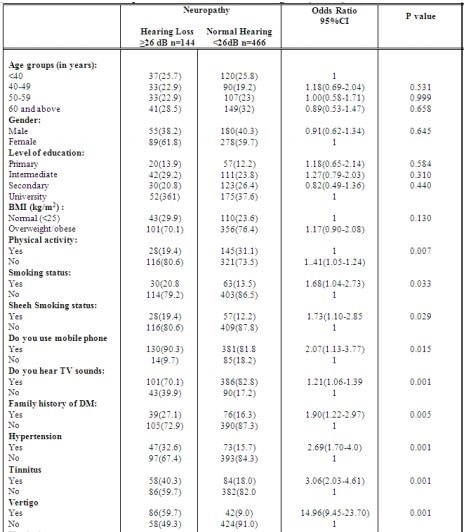 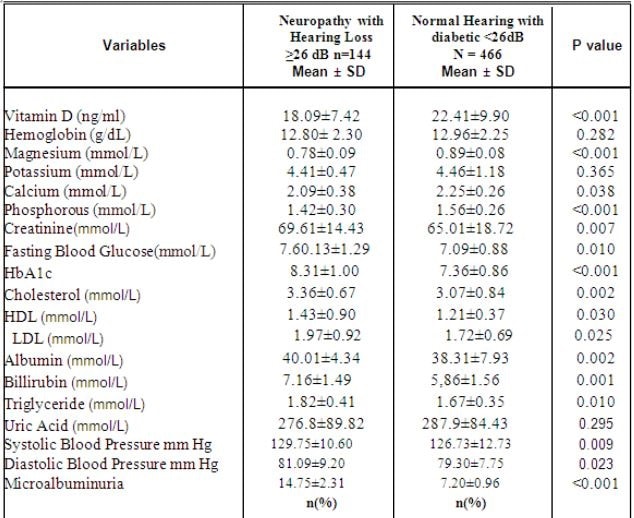 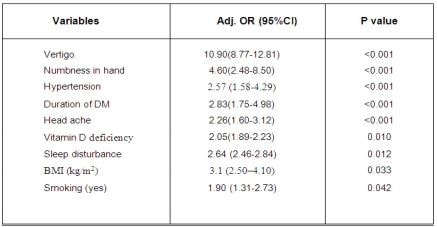 More recently, Bener et al. [5,6] studied 1,633 diabetic patients and reported an overall prevalence of peripheral neuropathy was 9.5 % among them. The analysis showed that the condition was significantly associated age, being male, consanguinity, family history of DM and having high blood pressure were significant predictors of diabetic neuropathy. Similarly, more recently Unmar et al [9] determined the prevalence of diabetic peripheral neuropathy (DPN) and subclinical DPN (sDPN) in 240 patients with T2DM using nerve conduction study (NCS) as a diagnostic tool. The results showed that 50.8% of the participants had DPN, and among them, 17.1% had sDPN. sDPN showed significant independent associations with age, height, HbA1c, presence of atherosclerosis and diabetic retinopathy.

The current study results are in concordance t with previous reported T2DM is related to high-frequency sensorineural hearing loss [18] and impaired auditory brainstem responses [9,13]. These results are in support of the fact that diabetes mellitus may have very complex repercussion on the auditory pathways. Usually, the chronic hyperglycemia of diabetes may affect its metabolic balance and function leading to hearing impairment and several reported studies have indicated that hearing impairment is associated with DM (3,9,12). Also, angiopathy and neuropathy of diabetes have been considered as reasons for hearing impairment as well [3]. Furthermore, Kang et al [12] reported that HbA1c level was associated with hearing impairment in the non-diabetic participants of current study and the high HbA1c levels might be closely monitored for hearing loss. A recent meta-analysis concluded that mild hearing loss is more prevalent in participants with DM [14] . The correlation between hearing loss and hypertension can be considered as an important risk factors. There a number of studies have indicated the strong association between hypertension-related hearing loss [6,11,14,19-20]. Most previous studies reported that hypertension was associated with high-frequency hearing impairment, and likewise, in this study, we found a positive association between these variables [6,18-23].

The current study results supports a strong positive association between neuropathy and hearing impairment among T2DM. The study confirms that the Hypertensive and diabetic patients have moderately increased risk of future hearing loss. Meanwhile, hyperglycemia could be considered as a modifiable risk factor for diabetic neuropathy, the regularly glycemic control may be the most effective and important therapy for reducing the incidence or slowing the progression of neuropathy and improving quality of life in T2DM patients.

AB designed and supervised the study and was involved in data collection, statistical analysis the writing of the paper. MÖ, LH, MG and HC were involved in data collection, interpretation of data and writing manuscript. RAD and MAG reviewed and revised the manuscript. All authors approved the final version. Acknowledgment: This work was supported by the Istanbul Medipol University, International School of Medicine . The authors would like to thank the Istanbul Medipol University for their support and ethical approval (Research Protool and IRB# 10840098- 604.01.01-E.3193).
Competing Interests: None to declare