‘Transport DNA’s, tDNAs deploy silicon hexafluoride as carrier for calcium phosphate, apatite for bone and tooth maintenance. SOx/NOx acid air pollution can cause its inappropriate synthesis in the nasal fossa and transfer via olfactory nerves to the brain, causing Alzheimer’s Disease. Since fluorinated anaesthetics relieve symptoms, it could easily be prevented.

As a Cambridge undergraduate in 1967, I chanced to discover the recently corroborated ferroelectric phase transition in ice crystallised in liquid nitrogen. Graduating in Natural Sciences, I read an MSc in Biochemistry at UCL, trained as a Clinical Biochemist at the University of Surrey, programmed computers for 10 years, compiled a thesis Some consequences of a consistent framework for the origin of life at King’s College Medical School. Since its examiners refused it publication in 1988, I’ve conducted literature searches. Melrose Press published SCIENCE UNCOILED in 2016. 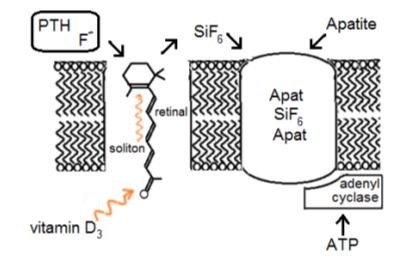 The wife of a sufferer who preferred not to be named had reported temporary symptomatic relief four days after anaesthetic administration (presumably fluorinated). I observed in my father’s case following a hip transplant. The metabolic insult promotes renal F- excretion22 as AlF6Ξand simultaneous brain clearance of F-. The neural network model23 of brain function fails to explain the memory recall but it’s consistent with my minion-based account24.

The age and distress of patients and their relatives obstruct investigation, anaesthetists liaising with psychiatrists might be test this proposal. Diesel exhaust25 abatement or a pharmaceutical vector introducing F- to the brain might prevent this consequence of careless exploitation of scarce resources. My father had a letter published in The Times newspaper26 concerning the danger of lead pollution from vehicle exhaust.